Discovering the Treasures of Greece 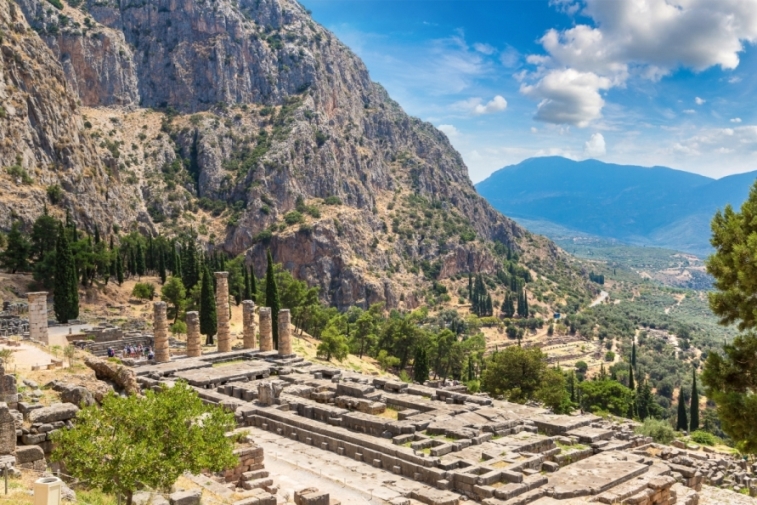 Far Horizon’s “Glorious Greece” trip couldn’t be more aptly named. While I could speak with enthusiasm and at length about any of the sites on the itinerary, I’ll restrain myself and focus on two of my personal favorites.
The first of these is Delphi. I have never seen a photo that can do this spectacular site justice. The sanctuary of Apollo was constructed on the steep slopes of Mt. Parnassos; to visitors, it seems to hang suspended over the gorge far below. The location alone is awe inspiring, and it takes no imagination at all to understand why the ancient Greeks felt here the presence of a god.
Beginning at least as early as the late 8th century BC, Greeks came to Delphi to consult Apollo’s oracle. By the middle of the 6th century BC, the oracle had developed an international reputation and was consulted even by foreign kings. Its fame is well reflected in its architectural remains, from Apollo’s temple to the theatre perched above it. With its remarkable array of art and architecture, Delphi also epitomizes a Greek cultural paradox: Here the Greeks from different city-states and ethné demonstrated the cultural traits and ideals that made them all “Hellenes.” At the same time, the fierce competition that separated and distinguished Greek city-states was also played out at Delphi, not only in the athletic contests of the stadium, but in the grand treasury buildings and dedications set up by individual states along Delphi’s Sacred Way. The audacity of this display of one-up-manship is almost as breathtaking as the view.
While there is certainly more to be said about Delphi, I’ll turn now to another of my favorite sites: Vergina. The Hellenistic ruins above Vergina afford a pleasing view of the Aliakmon plain, but the truly spectacular sights at Vergina are under ground. If you drive through the countryside in this region, you’re likely to spot strange artificial mounds rising up conspicuously above the flat surface of the plain. Such mounds, or tumuli, cover Macedonian tombs, often extremely elaborate in design. Not surprisingly, most were robbed of their grave goods long ago. At Vergina, a massive tumulus covered a cluster of tombs, and two of these were still intact when archaeologists excavated the site in the late 1970s.
Vergina is believed by many to be the ancient site of Aegae, and the Great Tumulus the location of the royal cemetery of the Argeadae: the family of Philip II and his son, Alexander the Great. Visitors can now enter the reconstructed “Great Tumulus,” which shelters the tombs and doubles as an on-site museum. In addition to viewing the tombs themselves, you can see the impressive collection of artifacts that were discovered in Tombs II and III, including golden funeral wreaths, delicate ivory carvings, ceremonial weapons, and silver vessels used to prepare and serve wine at ancient drinking parties. It is a sight that effectively evokes not only the culture and artistry, but also the wealth, power, and ruthless dynastic ambitions of the age that succeeded the Classical period.
Travel to Greece with Far Horizons!