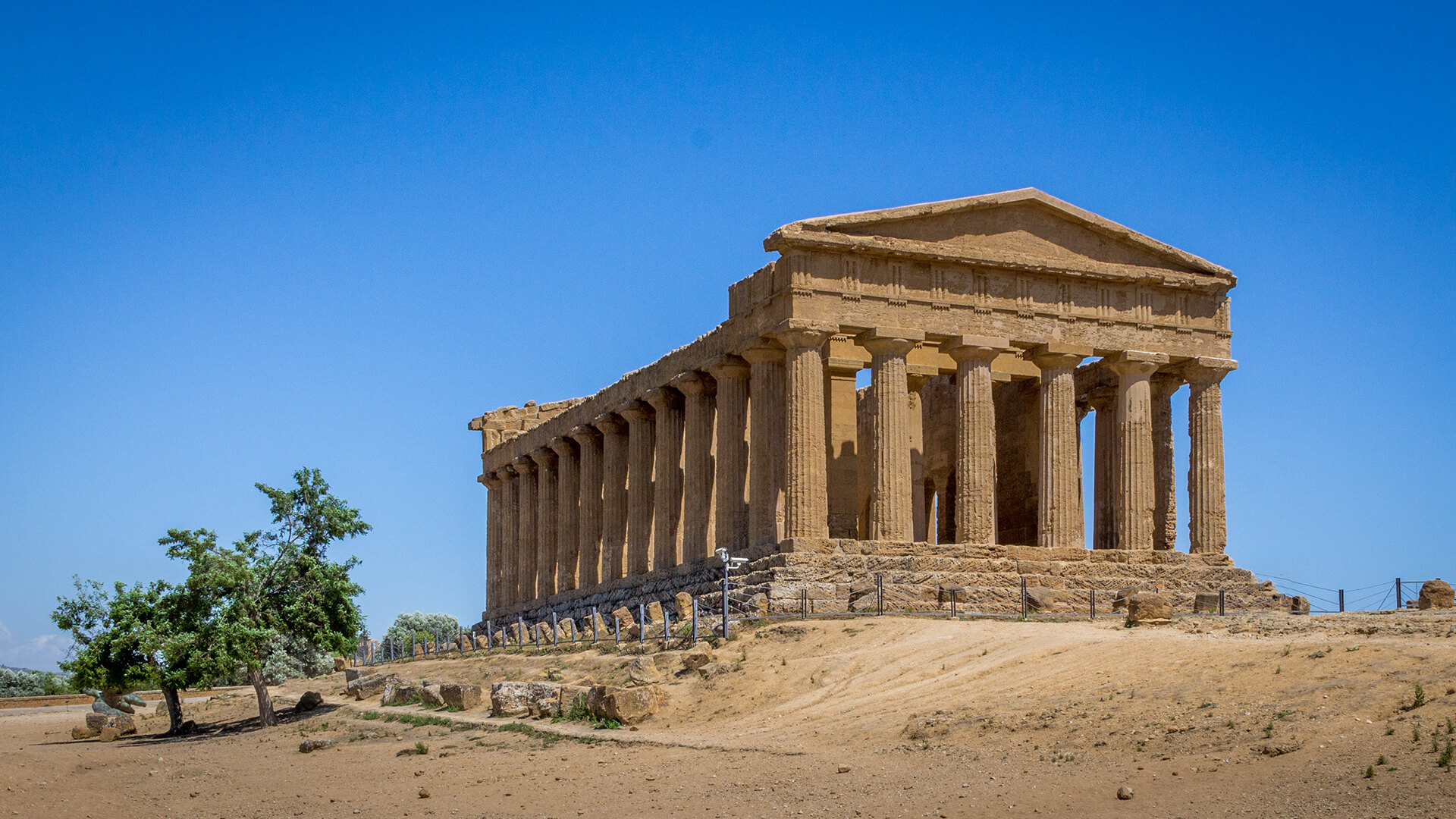 The archaeological history of Europe is truly wondrous for its diversity. History enthusiasts traveling around Europe will find themselves spoiled for choice, with historical treasures being found in every direction.

Whatever part of European history fascinates you most, you’ll discover an array of rewarding historic sites and museums to explore. The difficult question: what to include on your itinerary? What are Europe’s must-visit archaeological sites?

In this blog, we’ll select 10 of our favorite European archaeological sites. From the Acropolis of Athens to the Viking longships on display in Roskilde, this list will span centuries, countries, and civilizations. 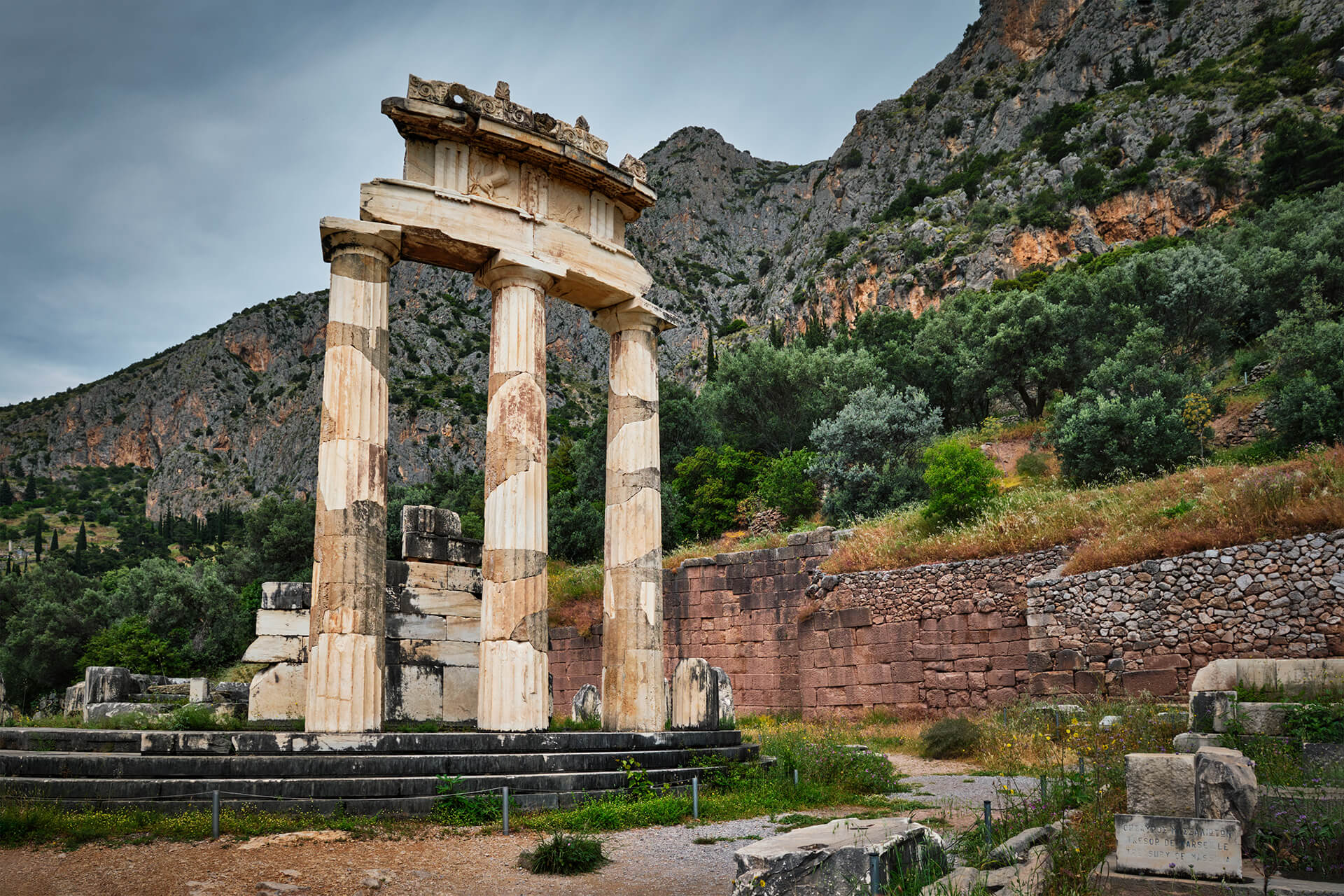 We begin with a site shrouded in mystery…

Originally called Pytho in legendary stories, Delphi was a sacred precinct in ancient Greece. This holy place was considered the center of the world (the omphalos– navel) to the ancient Greeks and was home to the Pythia, the most influential oracle of the ancient world.

The Pythia was the high priestess who delivered oracles from the Temple of Apollo at Delphi. It is unknown exactly how the Pythia delivered prophecies, though she is said to have sat on a tall, gilded, three-legged chair.

Some have speculated that the Pythia’s often ambiguous pronouncements were fuelled by noxious vapors rising from the rocks below her chair.

Whatever the truth, the oracle was influential enough to appear in the ancient writings of Aeschylus, Aristotle, Herodotus, Livy, Ovid, Plato, Plutarch, and Sophocles, among others.

Today, the archaeological site at Delphi is a UNESCO World Heritage Site.

Delphi features well-preserved ancient structures, such as a gymnasium and amphitheater, and an informative museum on the breathtaking slopes of Mt. Parnassus.

If you would like to visit Delphi in the company of an expert guide, the site is included on our The Archaeology of Greece tour.

The Viking Ship Museum in Roskilde, Denmark, is one of the many highlights of our Scandinavian Tour: The Vikings of Denmark, Norway & Sweden.

Far from the cartoonish depictions of sensationalist movies and TV shows, Viking culture was, in fact, incredibly rich. Vikings had their own architecture, laws, art, and religious practices. Beyond their infamous raiding activities, they were explorers, traders, farmers, and fishermen.

There’s simply no better way to take a deep dive into the captivating story of Viking history than by traveling across Scandinavia and visiting places built and shaped by Vikings, places where Viking culture still has a legacy today.

At the Viking Ship Museum in Roskilde, you can enjoy their permanent exhibition of the Skuldelev ships, five original Viking ships that were excavated nearby in 1962. Extant Viking ships are extremely scarce, having been built almost exclusively from wood.

Gazing upon the remains of genuine Viking ships is an extraordinary experience – a window into the life of a people so shaped by seafaring. 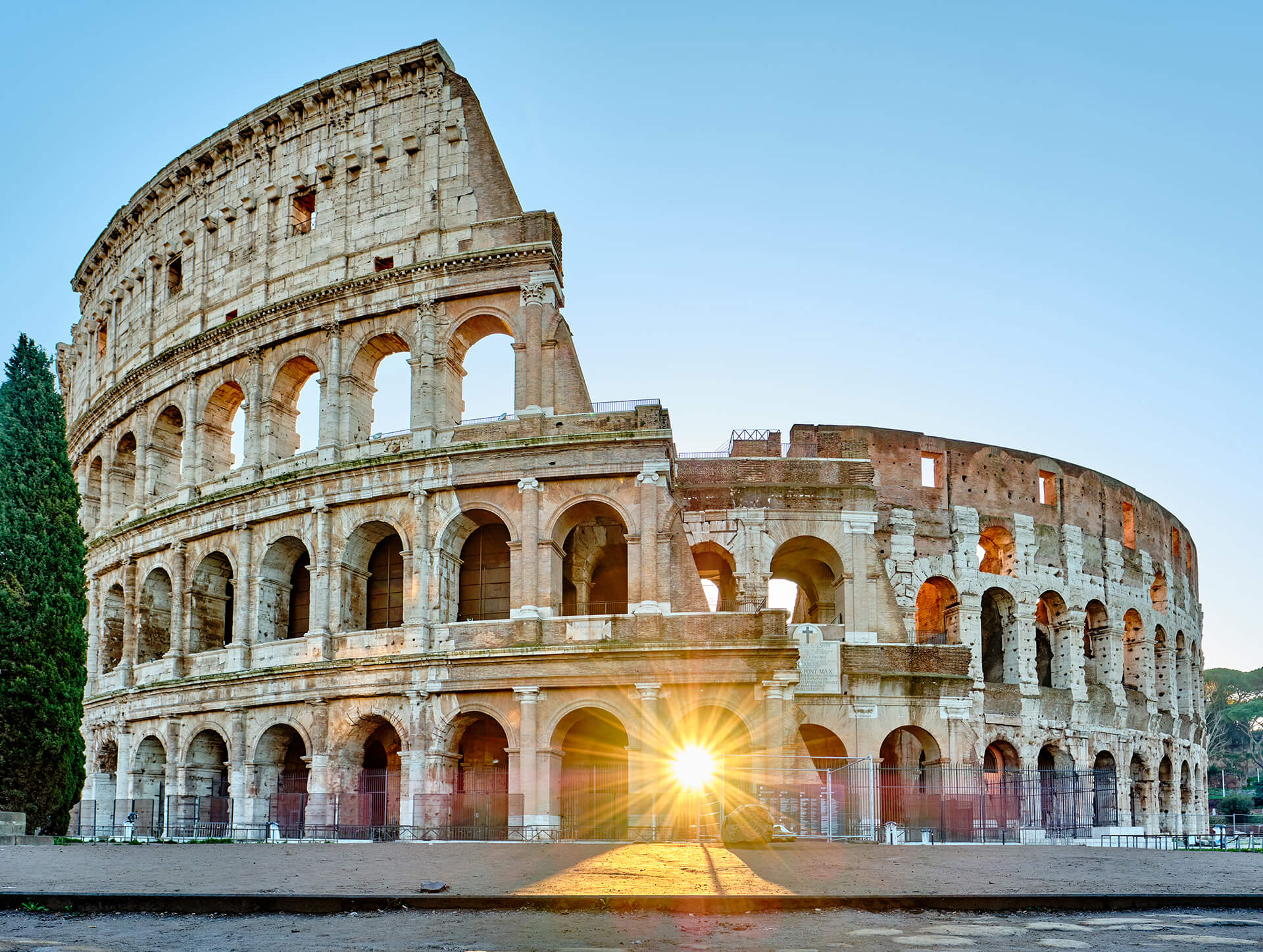 It would be remiss of us not to include what is perhaps the most famous ancient site in Europe. The largest Roman amphitheater ever built, the Colosseum routinely leaves visitors awestruck.

Construction of the Colosseum was completed in 80 AD, meaning the extraordinarily well-preserved arena you can explore today is nearly 2,000 years old.

>Join our Rome and Southern Italy Tour to enjoy 5 whole days exploring Rome and its museums in the company of Professor Thomas F. X. Noble, lecturer for The Great Courses.

In addition to the majesty of Rome, the tour ventures south, where we visit the UNESCO World Heritage sites at Pompeii, Herculaneum, and Paestum.

Ranking among the world’s oldest surviving buildings, Maeshowe is a Neolithic chambered cairn and passage grave on the beautiful island of Orkney.

Maeshowe is a masterful work of Neolithic construction. The Neolithic people of Orkney arrived on the island around 6,000 years ago and were Britain’s first farmers. Maeshowe is a powerful physical connection to these long-dead islanders and carries an unforgettable atmosphere.

The cairn is also notable for having been looted by the famous Vikings Earl Harald Maddadarson and Ragnvald Earl of Møre in the 12th century. In the process, the Vikings vandalized the tomb and left us with the most extensive collection of runic inscriptions found anywhere.

We explore a wealth of Neolithic and Norse history on Orkney with our Scotland Tour: Scottish Highlands and Lowlands. 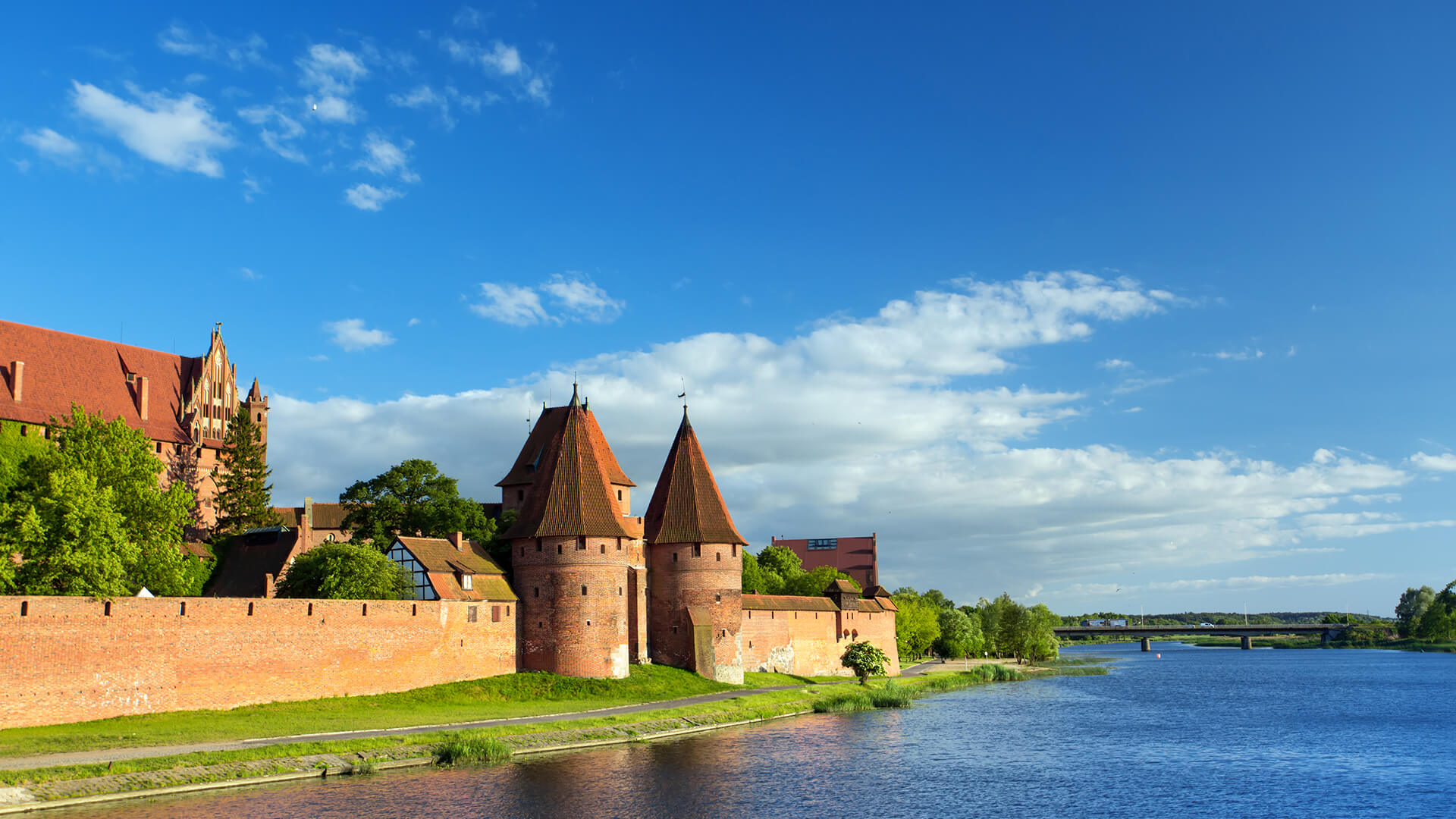 Originally built sometime during the 14th century, Kaunas Castle was created as a stronghold against invading Teutonic Knights,

The Teutonic Order arrived in this territory during the Northern Crusades (also known as the Prussian Crusade). This series of 13th and 14th-century conquests was designed to suppress and Christianize the Pagan Old Prussians who inhabited the Baltic regions of Poland, Latvia, Lithuania, and Estonia.

Initially invited into the Baltic regions by the Polish crown, with the blessing of the Pope, the Teutonic knights’ suppression of the Old Prussian cultures was brutal. And once the Teutonic Order had taken enough land in the area, they decided they wouldn’t leave.
Kaunas Castle was besieged by the knights in 1362. Of the castle’s 400 defenders, only 36 survived. The castle was to become a Teutonic outpost, and the knights celebrated a mass within its walls to mark their victory over the indigenous Lithuanians.

The castle was to be continuously fought over until the Teutonic Order’s enormous defeat at the hands of united Slavic forces at the famous Battle of Grunwald. 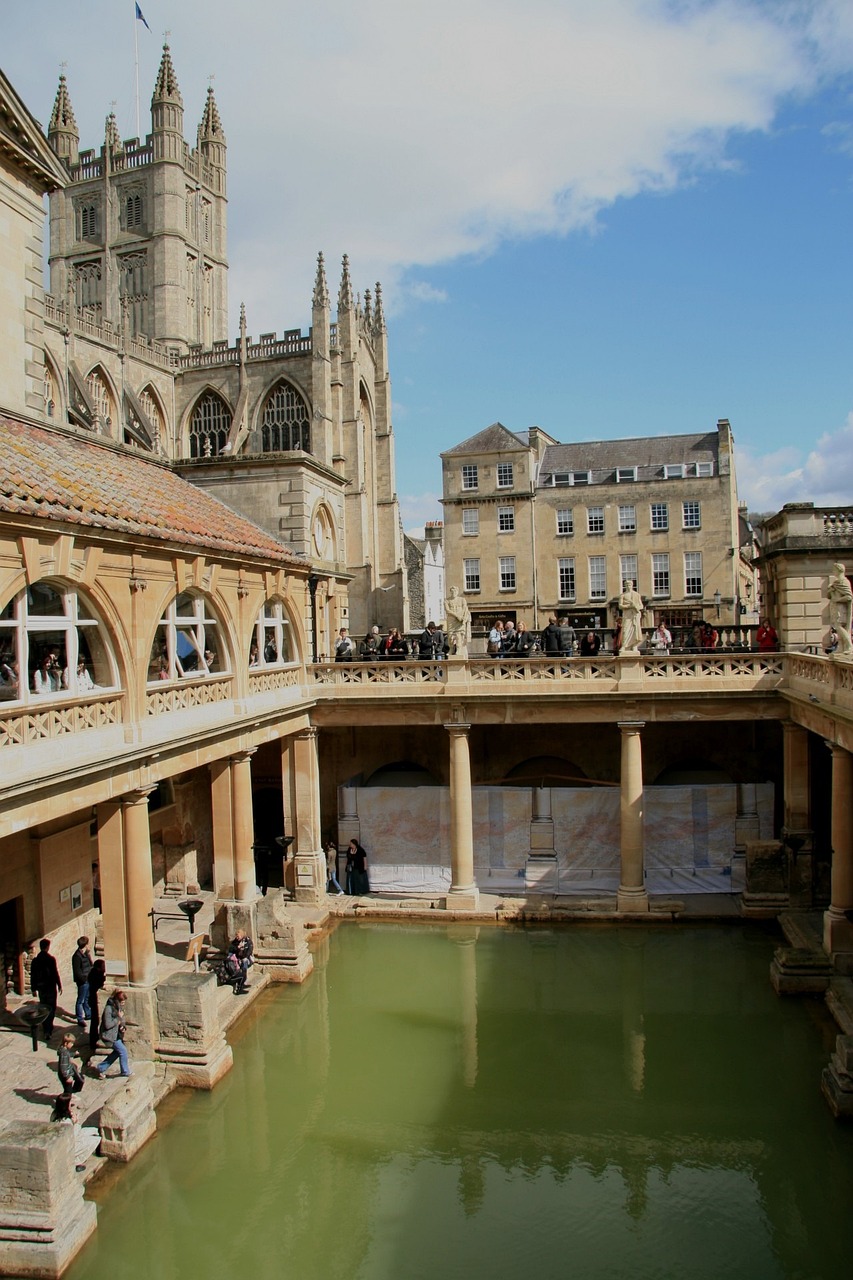 Bath is such a rewarding destination for those interested in history. The city is a masterpiece of Georgian architecture and has long been associated with towering figures from English history, including the beloved novelist Jane Austen.

But in the city’s center, you’ll find the archeological treasure that gave the city its name: the Roman Baths. Following the Roman conquest of southern Great Britain, a temple and bathhouse was built in the newly established Roman town of Aquae Sulis (later Bath).

In continuous use until the 5th century AD, the baths fell into disrepair after the fall of Roman rule in Britain. They were, however, revived several times throughout the medieval and late-medieval periods.

Today, visitors can explore the baths and their companion museum – an essential historical stop during any tour of Britain.

We explore Bath with our Wales and Roman England Tour. A UNESCO World Heritage Site, the Sainte-Chapelle royal chapel is a masterpiece of Gothic architecture and design.

Located on the Île de la Cité in the middle of the River Seine, this magnificently ornate chapel was commissioned by King Louis IX. Its primary purpose was to house his collection of Passion relics, including the Crown of Thorns.

Consecrated in 1248, the chapel was built at a time when relics were an enormous part of Christian worship.

King Louis IX carried the holy relics barefoot for the final stage of their journey to Sainte-Chapelle. They were to be housed in a silver chest which cost him 100,000 livres (two and a half times the cost of the chapel itself!).

The chapel was secularized during the French Revolution in the late 18th century. It was even used to store grain for some time.

During this period, the chapel was vandalized. Its precious reliquaries (including Louis’ 100,000 livres grande châsse) were melted down for other purposes.

However, nearly two-thirds of the stained glass you see within the chapel today is original, dating back to the chapel’s building in the 13th century.

See this masterwork of the High Middle Ages on our Artistic and Architectural France Cathedral Tour. 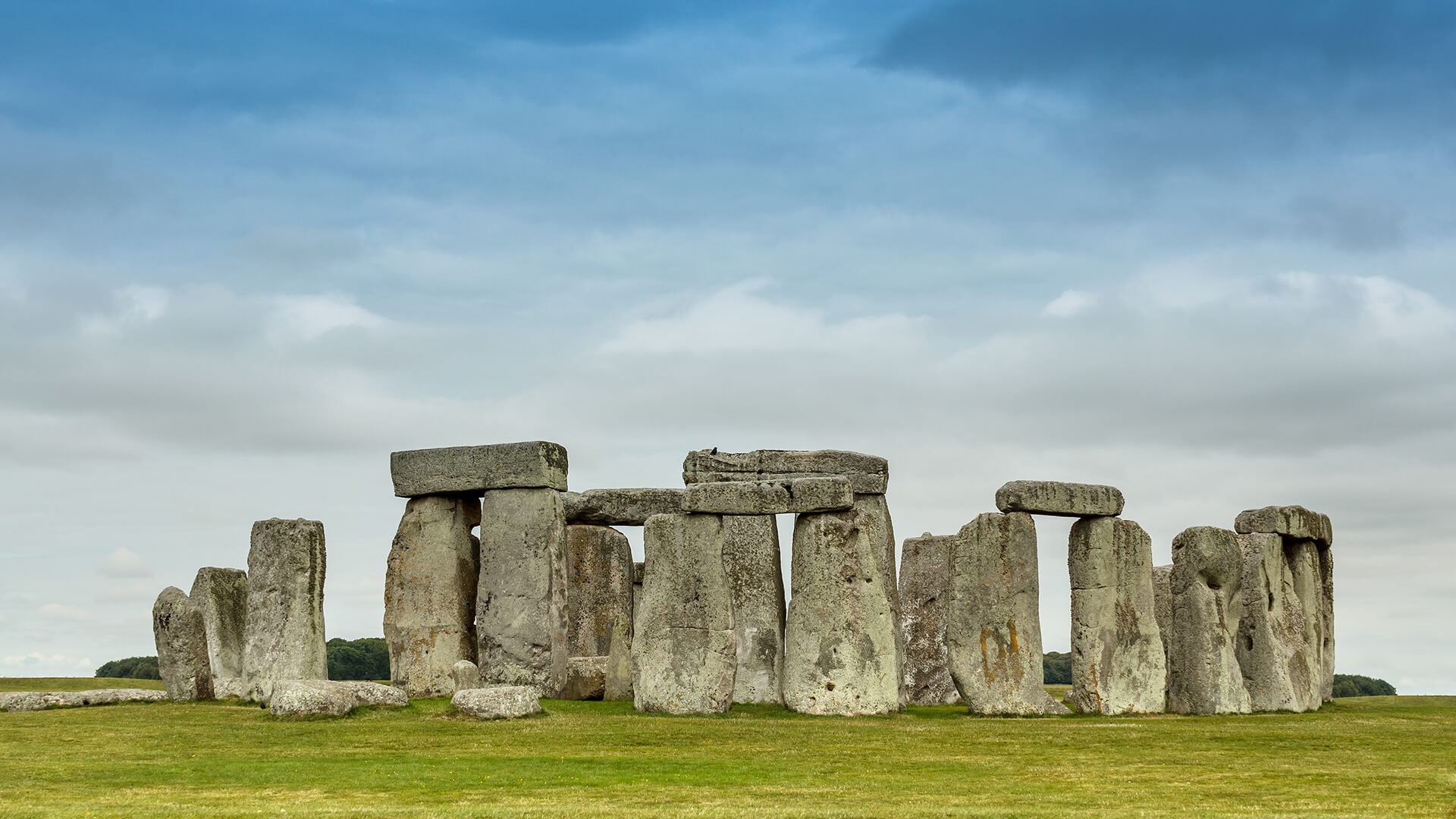 Constructed sometime between 3,000 and 2,000 BC, the enormous stone circle at Stonehenge is one of Britain’s most iconic historical sites.

The origins and significance of Stonehenge have long been debated, though the construction in its earliest form was most probably associated with burial rituals.

However, the magnetic pull of this remarkable place has been so great that many groups have been associated with it throughout its long existence. The site remains a popular pilgrimage place for neo-Pagans and Druid groups today.

Hear all the stories surrounding Stonehenge over glasses of real ale in historic inns and taverns on our Through a Glass Darkly tour, an archaeological pub crawl of England.

Valley of the Temples, Agrigento, Sicily

An extraordinary gathering of Hellenic ruins in Sicily, the Valley of the Temples (Valle dei Templi) is a UNESCO World Heritage Site featuring 7 temples, among other sites of archaeological interest.

The best-preserved of the temples is the Temple of Concordia (pictured above) – one of the finest surviving examples of ancient Greek architecture.

And, of course, when you’re in Sicily, you get to enjoy these historical locations with magnificent natural surroundings!

Our final selection is the enormous passage tomb at Newgrange, Ireland. This Neolithic burial chamber was built around 3,200 BC, making it older than the Egyptian pyramids and Stonehenge.

Such was the ingenuity of its builders that the chamber is aligned with the winter solstice, meaning once every year for around 17 minutes, a concentrated beam of light shines down the entrance tunnel and illuminates the burial chamber.

If you’d like to develop a deep understanding of Ireland’s storied past, join our Ireland Tour – 16 days of adventure featuring Newgrange, Skellig Michael, the Aran Islands, Rock of Cashel, Burren’s Megalithic Tombs, and much more!

This brings our list of 10 unmissable European archaeological sites to a close. If you have any questions about our tours and services, please get in touch.