Mexico Tour: In the Path of the Ancient Olmec

Olmec Tour: Travel to the remote sites of San Lorenzo, and Chalcatzingo plus the Xalapa and Mexico City Anthropology Museums.

Why Take This Tour? 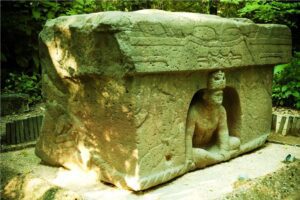 The Olmec civilization dates back to the 2nd century BC. Favorable environmental conditions allowed the society to thrive. This high productivity encouraged population growth from which an elite class developed and, accordingly, so did demand for objects of creative expression. During this trip we visit the birthplaces of this art, where the colossal heads and finely carved sculptures emblematic of the Olmec style were found.

This extraordinary expedition will take us into truly remote areas to explore some of the more elusive Olmec sites.  See La Venta, San Lorenzo, and Tres Zapotes, where the first of the Olmec colossal heads were found in 1862.  Climb the mighty cleft volcanic mountain to see the beautifully inscribed boulders at remote Chalcatzingo. Visit museums housing major collections of Olmec art including the vast open-air museum of Parque-Museo La Venta, the Carlos Pellicer Museum and the Xalapa Anthropology Museum, not only filled with exquisite works of art, but also presenting one of the loveliest edifices in Mexico. Also view the Olmec objects on display at the National Museum of Anthropology, housed in a unrivaled award-winning structure in Mexico City. The true highlight, of course, is traveling with expert Professor Karl Taube!

Won’t you join Far Horizons and only 13 others on this very special 9-day journey to the world of the ancient Olmec? Karl Taube received his PhD in Anthropology from Yale University and is currently a Distinguished Professor in the Department of Anthropology at the University of California, Riverside. He has done extensive archaeological and linguistic fieldwork in the Yucatán and has participated on archaeological projects in Chiapas, Mexico, coastal Ecuador, highland Peru, Copan, Honduras, and in the Motagua Valley of Guatemala. He is currently serving as the Project Iconographer for the San Bartolo Project in the Petén of Guatemala. Professor Taube has broad interests in the archaeology and ethnology of Mesoamerica and the American Southwest, including the development of agricultural symbolism in pre-Hispanic Mesoamerica and the American Southwest, and the relation of Teotihuacan to the Classic Maya. Much of his recent research and publications center upon the writing and religious systems of ancient Mesoamerica. Among his publications are The Major Gods of Ancient Yucatan, Aztec and Maya Myths, and Olmec Art at Dumbarton Oaks.  He has published extensively on the Olmec, including studies concerning the Olmec gods of rain and maize and the symbolism of jade and well as sourcing “Olmec blue” jadeite in Guatemala. 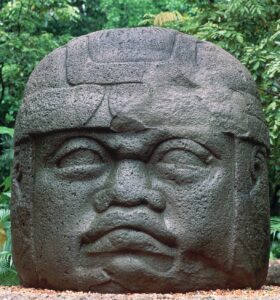 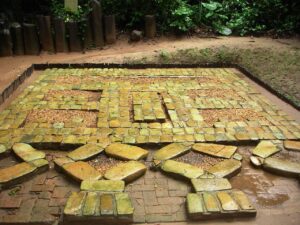 Day 1: Fly to Villahermosa, Mexico and immediately transfer to the Holiday Inn for a light supper. Overnight for two nights. (D)

Day 2: This morning, walk the pathways within the Parque-Museo La Venta, a vast open air museum where many of the stone monuments from the site of La Venta have been relocated.  As we stroll along the trails, agouti and coatimundi can be seen scurrying through the underbrush and vibrant tropical birds fly through the jungle setting.  This is where we see the first of the massive stone heads that are emblematic of the Olmec culture. In the afternoon, the Carlos Pellicer Museum, Tabasco’s main regional museum for archaeology and anthropology, will be our destination. Housed within a dazzling recently-constructed architectural masterpiece, it focuses on Olmec and Maya art and artifacts. (B/L/D) 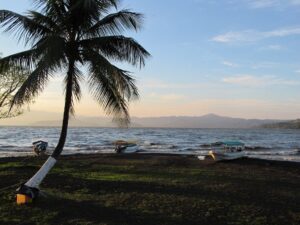 Day 3: In a large area cut by the Coatzalcoalcos River system, the Olmec heartland is home to many impressive sites, and the excavations at La Venta formed the foundation for the archaeology of this ancient civilization. Although the site has been damaged by oil exploration in the area, and none of the signature colossal stone heads remain, on an island rising above the surrounding swamp, the remains of the massive earthen mound that was the focus of the ceremonial complex can still be seen. One of the earliest pyramids known in Mesoamerica, the Great Pyramid is 110 feet high. After our explorations here, we continue to Lake Catemaco and overnight for two nights at the lakeside La Finca Hotel. (B/L/D)

Day 4: By no later than 1200 BC, San Lorenzo Tenochtitlán had emerged as the most prominent Olmec center and largest city in Mesoamerica. Without city walls for protection, San Lorenzo may have been largely a ceremonial complex. Archaeologists have uncovered numerous monuments here, including no less than ten of the huge basalt heads of rulers, the greatest of weighing 28 metric tons and standing almost 10 feet tall. After spending the morning at this site, return to Lake Catemaco with time for a boat ride on the lagoon in the afternoon. (B/L/D) 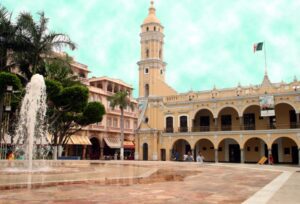 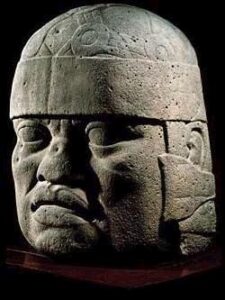 Day 5: This morning takes us to Tres Zapotes where the first of the huge Olmec monuments was found in 1862. When the rest of the Olmec sites started to decrease in importance about 400 BC, Tres Zapotes continued to survive and grow in importance, lasting into the Early Postclassic about 1200 AD. In the nearby town of Santiago Tuxtla, we will examine several Olmec monuments standing in the central plaza. After lunch, drive on to Veracruz, Mexico’s Gulf Coast port. Veracruz is a very special laid-back town and its charm can be felt by simply spending an evening sitting in the sidewalk cafés sipping lechero while listening to the music of the festive danzón and spontaneous dance performances. With its crumbling historic buildings, we may be reminded of old Havana. Overnight in the Hotel Gran Deligencia, near the central plaza in the heart of the city. (B/L/D) 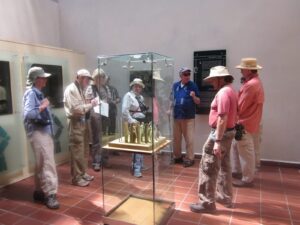 Day 6: Xalapa, the capital of the state of Veracruz, is today’s destination. Here, we visit the Anthropology Museum, certainly one of the most spectacular in Mexico. The building was designed by the architect Edward Durrell Stone, an early proponent of modern architecture in the United States. He designed buildings throughout the world and this stunning building opened in 1986. Huge, airy rooms pour down the side of a hill, each room home to artifacts of different ancient Mexican civilizations.  Spend a leisurely day examining the exciting display of art, with a concentration of the giant Olmec and Totonac heads. In the late afternoon, drive to Puebla and, time permitting, enjoy a short walking tour of the historic center, a UNESCO World Heritage Site. Overnight at the Hotel Palacio San Leonardo Puebla, housed in an historic colonial building. Dinner will be in one of the city’s excellent restaurants. (B/L/D) 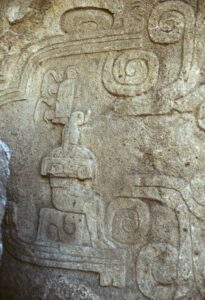 Day 7: This morning’s drive takes us to rarely-visited Chalcatzingo.  Rising dramatically from the expansive plains of Morelos is the spectacular cleft volcanic mountain upon which the site is situated.  In ancient cosmology, the cleft mountain represents the emerging place, and Chalcatzingo was the earliest mountain of creation. Its magnificent Olmec bas-reliefs carved on the talus slopes are the iconographic foundations for all later Mesoamerican mythology and we will hike up a massive outcrop to see them. Move on to Mexico City and overnight for two nights at the Hotel Zocalo Central, located in the colonial center of Mexico City, a UNESCO World Heritage Site. Dinner is on our own this evening. (B/L) 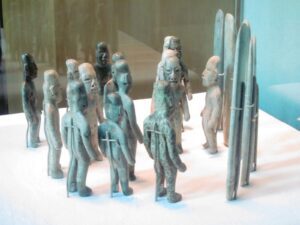 The Museo Nacional de Antropología, Mexico’s National Museum of Anthropology, is not just the finest museum in the country, but among the greatest in the world. The world-renowned repository of some 600,000 artifacts, the museum is spread out of two immense floors. The permanent exhibitions on the ground floor cover all pre-Columbian civilizations.  We will spend the morning viewing the museum’s great collections, with special emphasis on the Olmec Civilization. After time for an early lunch on our own within the museum café, drive back to the zocalo, the plaza in the center of the historic area where the afternoon will be spent in the magnificent Templo Mayor, one of the primary temples of the Aztec capital city of Tenochtitlán, now Mexico City. At the summit of this immense stone edifice were found the twin pyramids of the two important gods of Huitzilopochtli and Tlaloc, both frequently nourished by the Aztecs with the blood of human sacrifices. Within the spectacular Templo Mayor Museum are artifacts that have been found in the excavations.  Here see the monumental carved disk that portrays the death of Coyolxauhqui, the moon goddess.  Gather this evening for our farewell dinner party in Los Limosneros, where the chef puts a hip spin on traditional Mexican cuisine. (B/D)

Day 9: After breakfast at the hotel, transfer to the Mexico City International Airport for our return flight to the USA. (B) Single Supplement: $495.00. Should a roommate be requested and one not be available, the single supplement will be charged.

Cost does not include: a separate $150.00 (per person) donation check; passport or visa fees; airport or departure taxes; beverages or food not included on regular menus; laundry; excess baggage charges; personal tips; gratuities to guides and drivers; email, telephone and fax charges; or other items of a personal nature.

Donation Checks: As a tour company that benefits from the cultural and natural riches of our destinations, we have a policy of donating to the scientific and cultural projects and museums we visit. This has created a bond between Far Horizons and the academic and local communities that has helped us establish an extensive list of lecturers and contacts in each of our destinations. We ask that each participant write a check to the noteworthy project we designate. The donation amount is $150.00 per person. 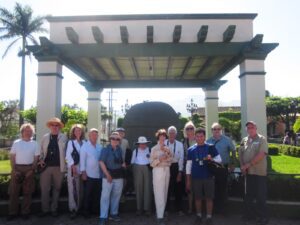 A deposit of $750.00 is required along with your registration form. Final payment is due 120 days before departure. Upon receipt of your deposit and completed registration form, you will be sent a reading list and a tour bulletin containing travel information. Prior to the trip, we will send links to various websites of pertinent interest. Click here to download our Registration Form.

Cancellations received in writing at least 120 days before departure will receive a refund less a $450.00 administrative fee. Cancellations received less than 120 days before the departure date will not receive a refund. If for any reason you are unable to complete the trip, Far Horizons will not reimburse any fees. Registrants are strongly advised to buy travel insurance that includes trip cancellation.

If you do not fly on the group flight, you are responsible for all flight arrangements and transportation (including airport transfers) to join the group.  If Far Horizons must change the trip dates or cancel the trip for any reason, Far Horizons is not responsible for any air ticket you may have purchased.  If you issue your own international flight, please send the complete schedule as soon as you have it.

The private tours of archaeological sites and talks by specialists are scheduled in advance and include a donation to each. Specialists working at these sites are excited about showing their work to interested enthusiasts. However, please be aware that there may be times when the director or a member of the staff may not be on site when our groups arrive due to other commitments.

Travel in this part of the world

This trip is designed for adventure loving travelers. We will sometimes be traveling into remote areas where roads are dirt or partly paved. The road systems will at times be relatively undeveloped, so even relatively short distances may take a long time to cover. We will be walking over uneven terrain for distances that may exceed a mile or more each day; hiking boots are strongly advised. Bellhops or baggage handlers will not be available at some of the hotels and you will be responsible for your own luggage. All participants are expected to be physically active and able to walk independently throughout our very full touring days. Keeping up with the group is each participant’s responsibility; please do not expect assistance from the other group members or staff. By maintaining an adaptable attitude you will soon be captivated by the beauty of the natural scenery and the fascinating archaeological sites you will visit. A spirit of adventure will reward you with a wonderful and memorable experience!

This Archaeological Tour to Mexico is limited to 14 participants