Why travel on Far Horizons’ Museums of Four Cities Tour ? Far Horizons proudly presents a truly unique 9-day tour of Berlin, Paris, London, and Cambridge, with an emphasis on each city’s great museum and their Egyptology collections. Begin in Berlin with a city tour that includes the Peacock Island Palace, a UNESCO
World Heritage Site. Spend a full day in Berlin’s Museum Island, another UNESCO World Heritage Site. In Paris, see the Obelisk, described in Dr. Brier’s latest book, travel up the Seine River by Bateaux Mouches vessel, and view the Egyptian iconography in Pere LaChaise, the largest cemetery in Paris. Spend a morning in the Louvre with Dr. Brier showing us the Egyptian collection, and the afternoon on our own for even more discoveries on our own. Travel by chunnel to London for a day in the British Museum, including a private viewing of Sudanese artifacts, and another day in Cambridge to see the Egyptian collection at the Fitzwilliam Museum along with the spectacular King’s College Chapel.

Overnights will be in charming hotels within walking distance of these great museums, and dinners will be memorable, including an evening at the Eiffel Tower Restaurant with views over the Trocadéro. 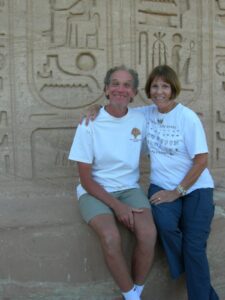 Bob Brier received his Ph.D from the University of North Carolina. He is not only one of the nation’s leading Egyptologists, but a brilliant lecturer and storyteller. He is professor of philosophy at the C.W. Post Campus of Long Island University and the author of several books including Cleopatra’s Needles: The Lost Obelisks of Egypt, The Daily Life of the Ancient Egyptians and The Secret of the Great Pyramid: How One Man’s Obsession Led to the Solution of Ancient Egypt’s Greatest Mystery. Professor Brier has served as director of the “Egyptology Today” program of the National Endowment for the Humanities, and as host of the Learning Channel series, The Great Egyptians. He has twice been selected as a Fulbright Scholar, and has received Long Island University’s David Newton Award for Teaching Excellence in recognition of his achievements as a lecturer.

Patricia Remler is an author, photographer, and art historian. She was the Researcher for four important Learning Channel documentaries – the three-part Pyramids, Tombs, and Mummies, the six-part series The Great Egyptians, the one hour Napoleon’s Obsession: The Quest for Egypt, and the three-part dseries Unwrapped, The Mysterious World of Mummies. She is the author of Egyptian Mythology A – Z. Day 2: Arrive Berlin.  After a light lunch, enjoy a city tour.  The Berlin Wall was a barrier that divided Berlin from 1961 to 1989, and the Berlin Wall Memorial Museum contains a small piece of the barricade along with displays on the history of Germany’s division. The Brandenburg Gate, Berlin’s most famous landmark, was an emblem of Berlin and German division during the Cold War. Today, it is a national symbol of peace and unity. We will travel by small ferry across the Havel River to Peacock Island, a nature conservation area since 1924. From the deck of the vessel we will observe landscaped gardens and the striking white palace that was built by Friedrich Wilhelm II in 1794-97.  Peacock Island Palace, or Pfaueninsel, is our destination.  Created as a half-timbered artificial ruin, that interior reflects the 18th century’s intellectual and cultural world. Together with other palaces in Potsdam and Berlin the island and the palace are part of the UNESCO World Heritage. Overnights for two nights at the Radisson Blu Berlin Hotel, located in the city center within walking distance of all main attractions. (L) Day 3: Five world-renowned museums make up Berlin’s Museum Island in the Spree River. A UNESCO World Heritage Site, the buildings were constructed between 1824 and 1930 by the most renowned Prussian architects. Our morning will be spent in the Neues Museum, home to selected objects from the Egyptian Museum and the Papyrus Collection. The celebrated masterpiece here is the bust of Nefertiti, the 3,300-year-old painted stucco-coated limestone statue of the Great Royal Wife of the Egyptian Pharaoh Akhenaten. Lunch and the afternoon is on our own to explore Berlin. While on Museum Island, a visit to the Pergamon Museum is highly recommended. This museum houses an incredible collection of exquisite classical treasures such as the striking reconstructions of archaeological buildings – the Pergamon Altar of Zeus, Roman market gate of Milet, Ishtar Gate with the Processional Way of Babylon, and the Mshatta façade. Gather for dinner tonight in one of Berlin’s excellent restaurants. (B/D) Day 4: Transfer to the airport for our morning flight to Paris. After a light lunch in a local restaurant, walk to the Paris Obelisk (read about it in Dr. Brier’s latest book, Cleopatra’s Needles:  The Lost Obelisks of Egypt), and then board the Bateaux Mouches vessel to travel up the Seine River towards Notre Dame de Paris, passing by the Louvre Museum, the Town Hall and the Conciergerie. Dinner is on our own this evening. Overnight for two nights at Hôtel Le Bellechasse, a charming boutique hotel located just steps away from the Musée d’Orsay on the Left Bank. (B/L) Day 5: The Louvre Museum houses one of the largest collections of Egyptian antiquities after the Cairo Museum comprising over 50,000 artifacts, includes those from the Nile civilizations which date from 4,000 BC to the 4th century. Dr. Brier will spend the morning taking us through the collection. The afternoon, including lunch, is free to allow time on our own in the museum. Gather this evening for a very special dinner party at the Eiffel Tower Restaurant with views over the Trocadéro.  (B/D)

Day 6: The Institut du Monde Arabe was founded in 1980 in collaboration with the countries of the Arab League and the French government. Beautifully located on the left bank of the Seine, the stunning building includes a museum and library. We will spend the morning in the museum which offers a view of the Arab world from a cultural, religious, social and anthropological perspective, from its origins to the present day. We then drive to the Pere LaChaise, first opened in 1804 and the largest cemetery in the city of Paris. There are more than 70,000 ornate tombs and Mausoleums of the rich and famous, and many are covered with Egyptian motifs. After a late lunch in a local restaurant, board the Chunnel to travel to London. Dinner is on our own. Overnight at the Radisson Edwardian Blu Bloomsbury, located next to the British Museum, for three nights.  (B/L) Day 8: Founded in 1209, Cambridge is the second-oldest university in the English-speaking world and the world’s fourth-oldest surviving university.  Our all day exploration of Cambridge will include the King’s College Chapel, containing the largest fan vault in the world and some of the finest medieval stained glass. Then it’s on to the Fitzwilliam Museum containing over 16,000 Egyptian artifacts including a notable collection of coffins. Highlights are the granite sarcophagus lid of Ramesses III and the vividly painted coffin of Nespawershefyt (also known as Nes-Amun) that is covered from head to toe in bright hieroglyphs and images in reds, greens and blues. This was one of the very first gifts to the Fitzwilliam collection, given in 1822. Upon return to London, meet for our gala final dinner together in a nearby restaurant. (B/L/D) CALL (per person, double occupancy) includes one internal flight (Berlin to Paris); the Chunnel train (Paris to London); all hotels; most meals (as listed in the itinerary); gratuities to guides and drivers; ground transportation; and entry fees.

Single Supplement: CALL.  Should a roommate be requested and one not be available, the single supplement will be charged.

Prices are based upon the British pound at 1.45 and the Euro at 1.30.  If a fluctuation raises the pound, the final price may go up.

Cost does not include: International flights to Berlin and from London/ a separate donation check (per person) for $150.00 to the donation project; passport or visa fees; airport taxes; beverages or food not included on regular menus; laundry; excess baggage charges; personal tips; alcoholic drinks; telephone, email, and fax charges; or other items of a personal nature. Donation Checks: As a tour company that benefits from the cultural and natural riches of our destinations, we have a policy of donating to the scientific and cultural projects and museums we visit. This has created a bond between Far Horizons and the academic and local communities that has helped us establish an extensive list of lecturers and contacts in each of our destinations. We ask that each participant write a check to the noteworthy project we designate.The donation project for this tour is the American Friends of the British Museum (please see information on this organization at http://www.afbm.org/). During our group tour of the British Museum in London, we will meet privately with Dr. Derek Welsby, the Keeper of the Department of Ancient Egypt and Sudan, who will take us into the stores in the Department of Ancient Egypt and Sudan to privately view material that has been found in Sudanese excavations. We kindly ask that you mail the $150.00 per person donation check – made out to ‘American Friends of the British Museum’ with ‘For post-excavation work on the Fourth Cataract project’ in the memo line – to the Far Horizons office with your registration. This check is non-refundable; should you cancel from the trip, the donation will not be refunded.

A deposit of $500.00 is required along with your registration form. Final payment is due 90 days before departure. Upon receipt of your deposit and completed registration form, you will be sent a reading list and a tour bulletin containing travel information. Prior to the trip, we will send links to various websites of pertinent interest. Click here to download our Registration Form.

Cancellations received in writing at least 90 days before departure will receive a refund less a $300.00 administrative fee. Cancellations received less than 90 days before the departure date will not receive a refund. If for any reason you are unable to complete the trip, Far Horizons will not reimburse any fees. Registrants are strongly advised to buy travel insurance that includes trip cancellation. International flights are not included in the cost of the trip. If you do not arrive or depart on the scheduled days, you are responsible for all transportation (including airport transfers) to join the group. If Far Horizons must change the trip dates or cancel the trip for any reason, Far Horizons is not responsible for any air ticket you may have purchased. Please send your complete air schedule as soon as you have it. NOTE: Please contact Far Horizons if you would like for us to handle your air ticketing.

The private tours of archaeological sites and talks by specialists are scheduled in advance and include a donation to each. Specialists working at these sites are excited about showing their work to interested enthusiasts. However, please be aware that there may be times when the director or a member of the staff may not be on site when our groups arrive due to other commitments.

Note about Travel in Europe

The group will be walking into and around cities and archaeological sites extensively. All participants must be physically active and able to walk independently for distances that may exceed three miles or more each day throughout our very full touring days. If you have questions about whether or not you are physically capable of this level of activity, please contact the Far Horizons office as soon as possible. Far Horizons and its staff have taken great care to select hotels on this itinerary that are clean, comfortable, elegant and well-situated to facilitate the site visits.  Keeping up with the group is each participant’s responsibility; please do not expect assistance from the other group members or staff.

This tour is limited to 16 participants